Welcome to my blog, Tracy Dog Tells All 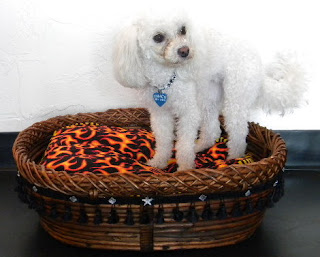 You're not gonna believe what happened here at Deco. One Saturday, when I wasn't working at the store, they hosted a pet adoption day with The Humane Society of Southern Arizona. My aunt, co-owner of the store, adopted one of the dogs. I know just how it happened as if I was there that day. The dog, a brown cocker, pretended to be recovering from two surgeries and acted all whimpy. He just laid there, as I hear it told. Well, she adopted him. "He's still a puppy," they say. What an excuse! And what a pest. He keeps pawing me. I growl at him, but he just doesn't get it. 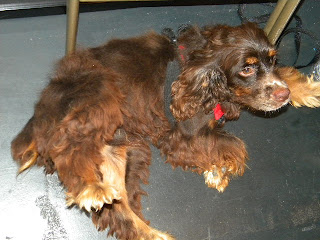 He jumps on people that come in the store, too. Well, they thought my store behavior needed improving. One day he tiptoed into the western room and grabbed a bendable cowboy. He chewed it up! Can you believe it? Another time he took a doggy purse and chewed it up. I caught him several more times in the act. One more chewing and he's out of here, I tell you. I'm telling all my followers and Deco customers, hurry in while there's still items for purchase.
Posted by TracyDogTellsAll@Deco at 1:47 PM No comments: